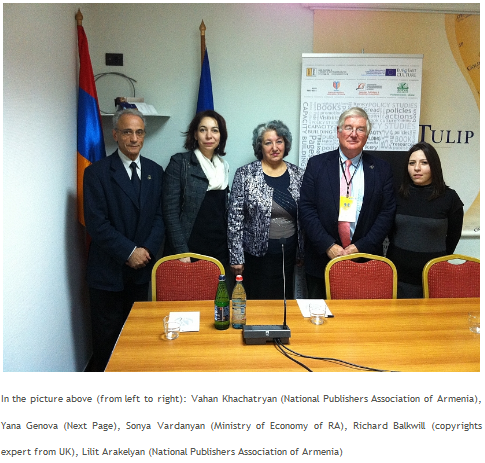 The third Book Platform capacity building event was dedicated to the topic of copyrights in book publishing in Armenia. Rather than a training event in the strict sense of the word, the workshop aimed at providing a platform where opinions and viewpoints of various concerned Armenian stakeholders – publishers, government officials, experts, librarians – could meet to discuss key issues of implementation of the existing legislation. And indeed, speakers included representatives of the Armenian Publishers Association (Vahan Khachatryan) who focused on the severe difficulties in implementation of the copyrights legislation, of the relevant department at the Ministry of Economy (Sonya Vardanyan) who outlined major pillars of the current legislation, and of the IP Agency of Armenia (Shushan Mkhitaryan) who described the proposal for the new IP-related legislation currently under preparation.

On the second day there was also a contribution by Arthur Varderesyan from the Police of the Republic of Armenia, who is directly responsible for monitoring and gathering evidence on law infringements. The new provisions of the law, which is currently under preparation within the EU Twinning Project "Strengthening the Enforcement of Intellectual Property Rights in Armenia", are meant to harmonize the Armenian IP legislation with European practices and is being prepared within the EU Neighborhood Policy. Throughout the two days of the workshop, there were often heated debates around two issues: 1) possibilities of participation of non-state actors in discussing the new legislation, and 2) the philosophy and practices of exceptions in copyright protection regarding access to information for the most vulnerable groups of the society.

Few potential concrete outcomes may results out of the debates. Firstly, the creation of an inter-ministerial Council on Copyrights to include representatives of the civil sector and the book business with a mandate to provide concrete suggestions for improvement of implementation practices in Armenia, was discussed. Secondly, the representatives of the civil society and the book business made a commitment to get involved more closely into discussing the draft of the new copyright law and insisting on public hearing prior to it being voted in Parliament.

As a joint event with the International Publishers Association (IPA) and the Ministry of Culture of Armenia, the workshop also included the international perspective on copyrights presented by Richard Balkwill of UK. Balkwill's contributions gave the participants the opportunity to see the Armenia's and the region's issues as part of the current global debate on copyrights.

26/10/2012
Book Platform project will be officially presented at the VI International Forum of Translators and Publishers, supported by the Ministry of Culture of the Republic of Armenia in the framework of Yerevan World Book Capital 2012. The project will be
წაიკითხე მეტი

27/10/2012
The next workshop within the Book Platform project, entitled "Тhe Role of Copyright System in the Promotion of Publishing as a Cultural Industry" will take place in Yerevan on 8-9 November. The event is organized by the International
წაიკითხე მეტი

09/11/2012
The third Book Platform capacity building event took place on 7-8 November in Yerevan, Armenia. The seminar was dedicated to the topic of copyrights in book publishing in Armenia.
წაიკითხე მეტი

14/11/2012
The VI Forum of Translators and Publishers, which takes place annually in Yerevan, this year was more international than ever before. In addition to the participants from CIS and Baltic countries, the Forum had invited guests from Germany, the
წაიკითხე მეტი